Dahlia imperialis is the best-known Tree Dahlia in Northern New Zealand. It can grow to 3 or more metres in height and flowers briefly in May, usually coinciding with strong equinoxal winds. Its’ hollow stems frequently succumb. The most commonly seen form has large pendulous “pocket handkerchief” flowers. There is a double flowered white form as well as a single flowered white. The origin of both the pocket handkerchief form and double white remain a mystery. Accessions of D. imperialis from the wild have more normal, circular single blooms.

For over a century people have tried to cross D. imperialis with the hybrid garden Dahlia, D. variabilis in order to widen the colour range, to no avail. Two decades ago Dr Melanie Gatt undertook a PhD study looking at the cytogenetics of the genus Dahlia.

There are other species of Dahlia that have perennial aerial parts that are not hollow and become woody. D. tenuicaulis and D. apiculata have been introduced into New Zealand and these were available to Melanie. By determining the chromosome number of various accessions, she was able to achieve combinations between the various Tree Dahlia species and more importantly D. coccinea, one of the two species that gave rise to the modern hybrid garden Dahlia. As a result, a whole series of Tree Dahlias were created with a range of flower colours and shapes. ‘Timothy Hammett’ named after my late older son, is in my estimation the very best. It produces truly massive woody stems and flowers throughout much of the year.

I have done my best to maintain this genetic material, but the brutal truth is that plants are safest when in commercial production and Tree Dahlias simply do not fit the current supermarket model of the retail garden trade. Equally we are not a production nursery, we are breeders and one needs to be properly geared up to supply plants by mail order. For this reason, we have decided to offer seed in the hope that enough kindred spirits will help to keep this germplasm alive. To check viability of the seed, which is slender in comparison with that of the garden dahlia, we germinated seed last season and planted out the resultant plants. They were planted fairly late so didn’t reach their full stature, but demonstrated wide variability in plant habit and flower form and colour.

I have again lost ‘Orchid’ that everyone seems to want but there were individuals in the population, which resembled it in both shape and colour, plus others of interesting colour on the red/yellow side of the spectrum. Because of the hybrid nature of the seed from open-pollination and the hybrid nature of the parents, there is little point in offering seed from specific selections; better to offer a mixture. 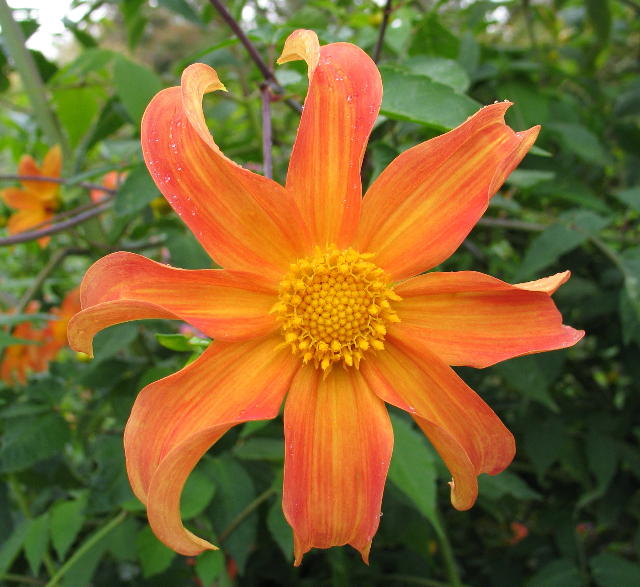 Plant breeding, however scientific, is a lottery. Every seed will not produce a winner but I am sure there will be gems amongst this seed and between us we can preserve and develop Melanie’s work of two decades ago.