SWEET PEA - THE BENEFITS OF BUYING SEED DIRECT FROM THE BREEDER

It is the role of a plant breeder to produce new and improved cultivars (varieties produced by man). As Sweet Peas are grown from seed it is important that each cultivar is fixed, that is, it breeds true for its main attributes, before it is offered for sale. Typically it takes about seven years from the time a cross is made until a new cultivar is fixed. It then needs to be multiplied. 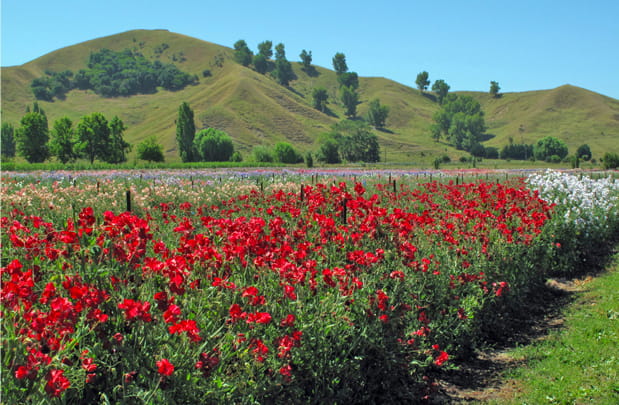 Initially plants are grown on supports as in the home garden, but much more extensively. Seed is harvested by hand. Even when a cultivar is considered to be fixed, there is always some variation, in the same way that a photocopier produces the odd bad copy. By growing on supports any off types can be removed and not allowed to set seed.

By buying direct from the breeder you are buying mother seed, carefully harvested by hand. In addition you have the opportunity to obtain new cultivars well before they become more widely available.

Traditionally, seed initially produced on supports has been considered to be mother seed for planting on a much larger scale for field production where plants are not supported and are harvested by machine. Clearly it is not possible to remove off types easily from say a 20 acre crop.

If the next crop to be sown is from field production, rather than new mother seed, off types soon build up. Those off types with the highest fecundity soon dominate and genetic drift occurs. This means that after just a few cycles of multiplication a cultivar may bear little resemblance to when it was first released while mixtures, grown as mixtures, end up containing only a few colours.

The phenomenon of genetic drift is especially pronounced for characters such as flower shape and time of flowering.

Off types with the highest fecundity soon dominate and genetic drift occurs. After a few cycles, a cultivar may bear little resemblance to when it was first released, with a reduction in colours, and variations in flower shape and time of flowering. 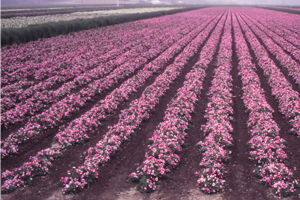 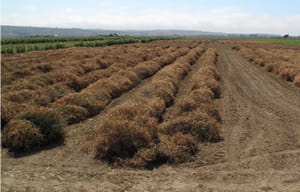 Evolution of the sweet pea 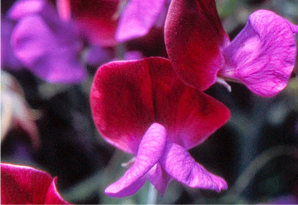 The original wild Sweet Pea has relatively small flowers. These consist of five petals. A big one at the back is called the "Standard" as in a flag. The two on each side are called "Wing" petals, while the remaining two are fused together to form a "Keel". This demurely covers the sexual bits, made up of an ovary, style and stigma, the female bit, while ten separate anthers constitute the male bit.

Over millions of years of evolution, the ovary, style and stigma became strongly curved and the keel petals clamped the anthers in tight contact with the stigma, thus ensuring maximum self-pollination and seed set. All Sweet Peas bred before 1901 had this flower form.

A mutation occurred that year in a number of places, where the petals became larger and as a consequence the Standard and Wing petals became wavy while the Keel petals were no longer clamped. The plant that was found in the garden of the Spencer family in England was duly named 'Countess Spencer' and all Sweet Peas with this wavy flower form are said to have Spencer flowers.

For many years, enthusiasts were only interested in cultivars with this flower form and the obsession with competitive shows resulted in cultivars that were just a single colour, so called "selfs". Around the time Keith became interested in Sweet Peas, the 1960s, a small collection of ancestral types became available and these contained bicoloured forms where the Standard is a distinct colour to the Wings as well as Flaked forms. In addition they were more sweetly scented than the larger Spencer types.

Over the last 25 years, we have developed wonderful Sweet Pea cultivars that combine the weather tolerance and fragrant perfume of old-fashioned types with larger Spencer shaped blooms which have beautiful ruffled form.

Spring Flowering types are best sown in the autumn while Summer Flowering types are best sown from mid winter in areas with mild winters like those experienced in Northern New Zealand. Spring and Summer types produce more sturdy plants, which produce strong basal shoots that soon take over from the primary shoot. Notwithstanding both the Winter and Spring strains perform very well if sown at the same time as the Summer types.

Scent is a difficult characteristic to breed. Expression of scent is very much dependant on temperature and humidity, while different people have differing ability to detect scent. Notwithstanding, Keith's work in combining the colours of the ancestral cultivars with bigger flowers and longer stems has also resulted in strongly perfumed cultivars. His 'High Scent' is recognised as the world benchmark for scent. This has smaller flowers with a clamped keel, but new introduction 'High Society' combines a waved, crisp white ground picotee edged pink flower with strong scent.

Very frequently, home gardeners are advised to soak seed overnight before sowing. This is unnecessary and potentially harmful for any hand harvested seed obtained from this website. Because of harvesting methods, seed from field production can on occasion result in hard seed coats, which delays or prevents germination. This is why the idea that seed needs to be soaked to identify hard seed has arisen.